‘Everything is Dada’ in Yale Art Gallery’s new exhibit 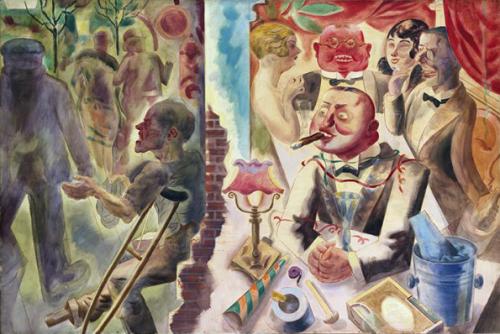 In 1916, a group of young men and women from across Europe came together in Zurich and shook the foundations of the art world. Firmly anti-authoritarian, they started an art movement that is being celebrated in “Everything is Dada,” a new exhibit at the Yale University Art Gallery.

Marking the movement’s centennial, “Everything is Dada” presents major paintings, sculptures, drawings, prints, and photographs from the gallery’s collection by Jean (Hans) Arp, Marcel Duchamp, George Grosz, Francis Picabia, Man Ray, Kurt Schwitters, Sophie Taeuber-Arp, Beatrice Wood, and many others. The exhibition also features a Dada-inspired installation and a series of programs that highlight the provocative and performative aspects of this avant-garde movement.

Dada artists questioned established norms and academic traditions and created works that blurred the line between fine and applied arts. They rejected the idea that an object needed aesthetic value to be considered art, and they claimed that everyone could be an artist. Dadaists incorporated everyday objects — such as newspapers, mechanical parts, light bulbs, and other random items — into their works to capture the zeitgeist. They also experimented with new techniques such as collage and assemblage and invoked the element of chance in the creative process. At the Café Voltaire in Zurich, Dada artists staged innovative and often shocking shows that included dance, music, poetry, and puppetry, laying the ground for postmodern performance art.

Dada was linked to the events of its time, and many of the artists, such as Grosz and Picabia, expressed in their works the irony and absurdity they saw during and after World War I. When the artists left Zurich — which had served as a safe haven in neutral Switzerland during the war — to return to their home countries or move abroad, Dadaist ideas spread to other cities, including Berlin, Hanover, Cologne, and Paris. New York was another incubator of Dada ideas, and the work of American and European artists there, such as Duchamp and Man Ray, was infused with a similar irreverent approach to artistic traditions.

Although Dada took on very different shapes over the years and evolved into other movements, all of its artists shared an enthusiasm for provocation and a desire to break from the moral, political, and aesthetic dogmas of the time. With their mockery of elitism and tradition, their use of mass media and popular culture, and their experimental methods, Dada artists challenged the concept of what constitutes a work of art, setting the stage for many later avant-garde movements including Surrealism, Pop art, and Conceptual art.

Frauke V. Josenhans, the Horace W. Goldsmith Assistant Curator of Modern and Contemporary Art and curator of “Everything is Dada,” explains that “rather than giving a single definition or a historical survey, this exhibition investigates Dada’s irreverent, humorous, and unconventional approach. It illustrates how, 100 years after its birth, Dada’s impact on art can still be felt today.”